Sköll had our sun grabbed last Friday, but the sun had escaped the attack - a horse harness pendant depicting their story..

This week's blog is from myself. Next week's blog.. is a surprise.. a Russian surprise in fact.

But first.. the intruiging story of Sköll and Hati, captured in an intruiging and utmost (unique) rare artefact.. 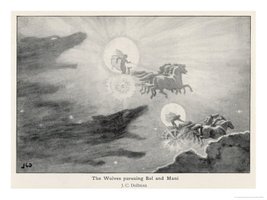 This week I'd like to show you a probably unique cast bronze Viking harness pendant of 11th century date, formed as two wolves chasing each other; probably representing the celestial wolves Sköll and Hati wo chase sun and moon.

It was found at Thetford in Norfolk.

Looking at it as a 'Yin & Yang' kind of symbolic way, the two wolves represent 'good' and 'bad'. Black and white. Sometimes the light is in our lives, sometimes the dark part takes over.. They are chasing one another in an everlasting 'circle of life'.

The legend of Sköll and Hati

In Norse mythology there is the intruiging legend of Sköll and Hati, wich goes as following:

Sun liked watching waves crash on the shore, so he would hold the sun for hours close to the earth. All of that heat turned the land into a desert, and left the rest of the world dark and cold. Moon liked the sight of the deep forests, where she would tie her horses for hours on end. What's more, the animals and people, even the gods didn't know when to wake and when to sleep.

The gods in Asgard sent messengers to Sun and Moon, they offered them gifts of gold and jewels, but the children just laughed.

"We shine more brightly than gold or jewels," said Sun.

Odin even threatened them with his magic spear, but Sun and Moon knew that the gods needed them to travel across the sky. Now that they had the job, they were going to do it just the way that they wanted. Besides, if the gods attacked their chariots, they may destroy the sun and moon forever.

Loki, the god of mischief smiled as he watched Odin and the other gods rage over the work of Sun and Moon. But his smile turned to a frown when he realized where the Sun had stopped his chariot. It was right above the volcano home of Surt, the fire giant. Loki had long been plotting to sneak into Surt's mountain and steal the fire diamond, a huge and beautiful gem made of living fire. Now, with the sun always shining, the giants that guarded the mountain were always awake, and Loki couldn't sneak past them.

Loki was thinking about his problems as he walked through a forest. He was far from the Sun and the trees stretched long shadows across the ground. Loki heard a growling sound. He quickly climbed into a tree and saw a pair of wolves chasing an exhausted deer through the forest. That gave Loki an idea.

Loki knew that no ordinary wolves would do for his plan, so he traveled to the Ironwood, a land of giants and trees as strong as steel. There he found two giant wolves, Skoll and Hati.

Loki went to the forest and shot a deer with his bow. He roasted its meat with garlic and onions, and brought it to the wolves' cave.

"I have a gift for you," said Loki, giving them the meat.

The creatures gobbled the meat down in a single bite. They had never tasted cooked meat and spices before.

"More! We want more! Get us more," they growled.

"I can't help you with that, but I can tell you where to find some more meat like this," said Loki.

Loki took the wolves outside and pointed to the Sun and the Moon, sitting motionless in the sky.

"That is where you will find more meat like that," said Loki.

"Grrr what good does that do us? We can't fly," said Skoll.

"Now I can help you there," said Loki, and saying that, he took out the pouch of flying powder that he had stolen from Odin and sprinkled it on each of the wolves.

The giant wolves leapt into the sky.

And the wolves were off.

When sun and moon saw the wolves, they drove their chariots high into the sky.

But you may have noticed that at some times of the year, the Sun moves more quickly over the sky and at other times, it moves more slowly. That is because during the summer time, when the south wind blows, Skoll gets tired, and his fur feels warm, so he slows down. But When the north wind blows, and cold winds waft over the world and sky, Skoll feels stronger and chases the sun even faster than before, making out winter days much shorter than our summer days".

It was no sun eclipse..

So.. last weeks Friday - Sköll seemed to catched up with the sun.. but at the end of the morning, the sun escaped.. once again. For this time..

One day, he won't succeed in this, anymore... 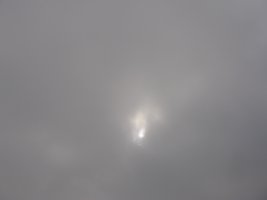