A Norman church - St. Bees priory in Cumbria. The Norman Age connection with The Viking Age.

Interested in the Viking Age, - understatement of the year - lately I cannot help myself felling in love with the Norman Age. I am surprised by the beauty of architecture involved, and one cannot help asking himself why 'The Viking Age' is addressed to have terminated at 1066 A.D. architectally wise.

For example, as one sees the Norman church in Kelpick, Herefordshire - wich is high on my list for a next journey to visit.

Is it that strange to see very similar forms of ornamentation to the (also 12th century) as 'Urnes art style' as latest phase of art style in the Viking Age  of Urnes stave church ? (the link leads to a lovely blog of Ru Smith lately having visited that church in Norway) compared with the outspoken Norman architecture involved at Norman period churches, as those in Kelpick or, in this article, St. Bees in Cumbria ?

So, is 'the end of the Viking Age in 1066 in England' a too rigid dated ? In my opinion, Scandinavian influence continued well into the late 10th and 11th century. It were Scandinavians (though from France) who brought the Norman art style into England and other countries as well.

Interesting - in that respect - is the foreword of Patrick F. Wallace in the just published book Viking Dublin - The Wood Quay Excavations.

In the introduction and aknowledgements he states:

'There are problems for an archaeologist wishing to use the word 'Norse'. The inhabitants of Dublin (note: of course he is addressing Ireland here, but the architectural art style involved also, wich occurred in England as the Norman style also) and the other towns were probably of mixed Norse and local stock from early on and descriptions of both place and people should reflect this. Further, the extent of intermixed nature of so many aspects of the material remains, including decoration, means this culture should be termed 'Hiberno-Scandinavian'from the mid-to-late tenth century onwards. (In Ireland) That mixed culture was well established by the time of the battle of Tara in 980. For convenience, the material culture up to about 980 may be termed 'Viking', whilst 'Viking age' describes the whole period from the 840's  to the arrival of the English or Anglo-Normans in 1169.'

He adds further on: 'A difficulty for the archaeologist is how to recognize the evidence we have for the continuity of so many influences from the late Hiberno-Scandinavian phase into the late twelfth century. This is why from an archaeological point of view, I am recommending that the material remains of the 1100-1200 period to be termed 'Hiberno-Norman'.

In Cumbria, we have visited a nice Norman church, founded sometime between 1120 and 1135. The front door is of a distinct Norman/Romanesque style and in the opposite of the main door there is a Romanesque lintel of ca. 1120 A.D. showing St Michael fighting a dragon. Some distinct Celtic like influences are also to be recognised - see the sculpture sign just left of the tail of the dragon.

There is even a 10th century cross in the graveyard - where else ? , but we appearantly have missed that.. gotten spoiled as it seems of all the crosses we had seen already presumably.. 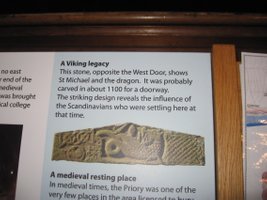 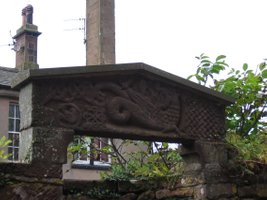 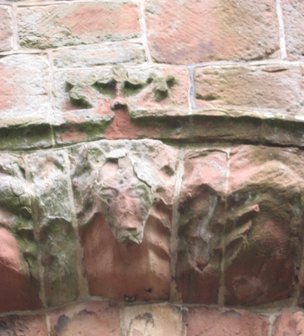 Image above: an abraised face figure at top of the front door of the church.

Beneath: the characteristic front door with outspoken Norman/Romanesque architecture..

For more reading on Norman architecture in England I recommend the book (expensive, in Dutch we say 'a rib out of the body -  but truly worthwile !)

Oh yes.. a short visit back to my prior blog on the Viking section in the Kendal Museum in Cumbria

The stone head figure - where I had expected the Sheela-na-nig to be exhibited, is of non Viking Age date. The Museum commented when asked:

'This is our 14th century stone head. It was found at a barn in Borrowdale, on land previously owned by Furness Abbey '

Next question I will address is why a 14th century stone had been incorporated in the Viking Age section and not the Sheela-na-nig. Maybe it was found 'more appropiate' ?

Certainly to be continued dear readers.. 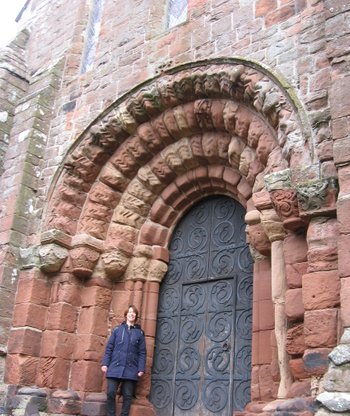