And why Viking Age finds in Holland are so rare.

A very rare intact silver ring from the Viking Age recently had been found in the borough of Buren. Cees-Jan van de Pol detected the ring with his metal detector.

On the same location also a piece of melted silver in the form of a drop was found together with a silver coin from the 10th century in the clay ground of the Betuwe.

'Its form and decoration are pure 'Viking'

According to archeologist Nils Kerkhoven from Dreumel and Viking Age connasseur Luit van der Tuuk, this ring is unique for the Netherlands. Kerkhoven: "This is a special ring. We do know a (in fact: a few TK) golden ring from the Viking Age found iIts form and decoration are pure 'Viking'n the Netherlands. But according to me this is the first silver ring from the Viking Age found in the Dutch soil wich is almost complete. Its form and decoration are pure 'Viking'. You do not see that often." 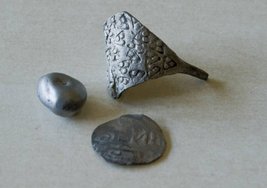 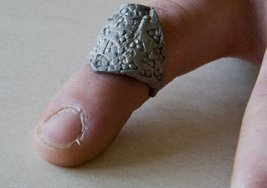 Viking Age artefacts are rarely being found in the Netherlands. Compared with by example England the discoveries are rather bleak. In Holland the Vikings ecountered, but never stayed for a longer period of time. There are theories about the existence of a long staying (few years) Viking army in or near the village of Asselt in the provence of Limburg, but that still is to be proven satisfactionally by archaeological researching to be undertaken in future.

Another thing is our history of ever changing coast lines and river walks. For example the Viking 'pirate post' on Walcheren had dissapeared into the sea over the centuries. Rivers inland have changed also in the course of centuries, making the exact original spot where an artefact originally was left behind sometimes fuzzy.

Vikings must have raided Holland and maybe traded, but their remains can be very elusive.

What we do have are finds from the area of Dorestad, a great golden armring of unmistakingly Viking interlace and knotted nature. Also from Dorestad there are two silver cloathing pins with filigrain decoration. They date from the first half of the 10th century. De decorated top of such pins have been found as beads on a necklace (see also my golden beads from Gotland). From some graves in Birka, Sweden, exact parallels are known.

Another Viking Age jewel, also from Dorestad, is a so called 'needle buckle' with knotted decoration. Such a buckle is categorized to the penannular brooches. These pennanular brooches were worn with the needle pointing to above. They have been found in many places in England.

Some years ago a silver armring with five rings hanging on it was being found in the sea by Callantsoog.

Such composed artefacts probably were made in the south of Sweden. The most south Swedish examples date from the second half of the 10th century. Another possible area of origin is Sjaeland in Denmark. Bij comparable armrings from Scandinavian findspots, the number of attached rings can increase to fifteen. Some rings are decorated with folded coins around them, making the jewel and the findspot where it originally came from, being dated accurately.

From the river Maas near Wessem, Limburg, the so called 'sword from Wessem' is famous, being the only one distinguishly Scandinavian in its decoration, sword is known. At the moment it can be seen at the Streekmuseum in Asselt, Limburg in the Netherlands.

Finally, two silver hoards from the Viking Age are known from Westerklief on Wieringen, the one being found in 1996, containing 1.6 kilogram of silver treasure. The other smaller one, just being found a few years apart from the first one. The one can be seen in the Rijksmuseum voor Oudheden in Leiden, the other one in the Informatiecentrum Vikingen op Wieringen.

In Domburg, Sealand (Holland) a Viking Age buckle  found in 2010.

In the Fries Museum finally a small golden ring from the Viking Age can be seen. In the museum of Dorestad several early medieval and some artefacts with a Scandinavian decoration can be seen.

So.. we do not have a lot, but our collection is growing still, due to the ever increasing popularity of metaldetecting !

Attached I have the links to the artefacts mentioned and musea where you can see them.

Addition June 7th: the curator of museum Dorestad pointed me to this link about another silver ring being found in Holland, Frisia, near Tirns in 2011: