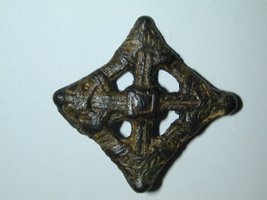 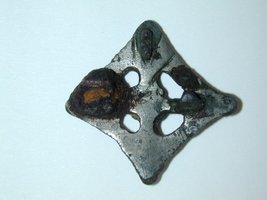 This brooch had been reported to the PAS and I attach the tekst written there integral here:

Near complete cast copper alloy brooch of later Early Medieval date; deemed Anglo-Scandinavian in cultural terms. The brooch is lozengiform in plan with openwork decoration. The brooch has a single stylised zoomorphic head at each corner of the lozengiform, the moulded detail of each of these, especially the area between the eyes and ears is slightly different, otherwise they are very similar with each one having a rounded protruding nose, raised ridge running up from this forming the snout or nose and a prominent brow ridge at the top of this. This arrangement forms shallow hollows for the eyes to either side of the snout. From the rear of each head there is a rectangular strip projecting inwards, 3 with one central groove for decoration and one with 2 grooves for decoration. These four strips abut a central, slightly raised, square shaped boss, therby forming an openwork cross arrangement. The square boss is plainly decorated with a single incised groove forming a smaller square in the centre of the boss.

The four heads are further linked together by strips of rectangular decoration protruding diagonally from the top of both sides of each head, forming the sides of the overall lozenge shape. It may be that these side strips are intended to be ears or antlers with each one being shared by two heads. There are traces of gilding surviving in the grooves of the design on the front of the brooch. The reverse of the brooch, which is flat stil has considerable surviving silvering. The pin fittings of the brooch survive on the reverse of the brooch and consist of two semi-circular lugs to hold the hinge in place and a small triangular shaped catchplate which is bent for securing, the now missing pin in position. The hinge fittings have ferrous corrosion between and around them, indicating that the pin was iron. There is a further fitting on the reverse consisting of a broken semi-circular lug with central, incomplete circular piercing. This does not appear to be a later addition, so is not a modification when the brooch pin was lost so may have been for the suspension of a now missing part of the brooch - perhaps a suspended chain, although this cannot be certain.

Brooches of this type have been found in both the Danelaw parts of England and in Scandinavia and are dated to the 9th to 10th centuries, c.850-1000 AD.

To be known as: Clipstone