In this week's blog I like to take you on a sea travel watching the stars..a sea travel, wich ends ultimately on the roof on a church..

Let us start with one of the most intruiging parts of this article. This is, that several of this Viking Age weather vanes actually were found .. on churches !

A pagan artefact in use on a religious building..

How on earth did they get there (presumebaly after use in prior century/centuries on ships) ? It is a question wich answers lays in the Mist of Mystery. Or isn't it ?

As it is, several famous weather vanes were being found on the church spires.

First we have the gilt-broonze vane from Källunge church, Gotland. Designed in the Ringerike style with a so called 'Great Beast' it is remarkably well preserved. As I could not find a photo of this specific weather vane, I added a drawing of it. The 'Great beast' - a distinct characteristic of the Ringerike art style, places it in the 11th century late(r) Viking Age. 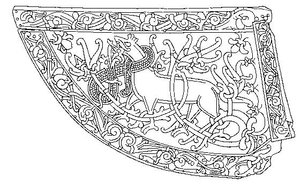 The second weather vane was found on Heggen church, Buskerud in Norway. Also cast in a fine Ringerike style, one wonders if some boy in more recent days had tried to shoot the vane of the churh-spire..

As our own Dutch poët Lucebert was saying: 'Everything of value is defenceless'...

The detail is showing us - again - a 'great mythical beast'. A peacock ? One could see this with little phantasy.. 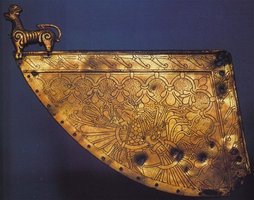 The third famous weather vane to be addressed here, is the weather vane from Söderala, Hälsingland in Sweden.

Once again this weather vane is representing state of the art Ringerike style, in a late form of this distinct style. 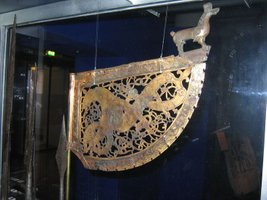 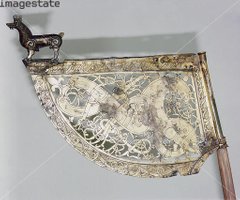 The common feature on these specific three weather vanes is, that they are remarkably well preserved. Could it be they were in use for just a short period of time at the end of the Viking Age ?

A weather vane from Tingelsted can be dated as late as from the 12th century in a distinct very late Urnes transferring to Romanesque style execution. The more floral motifs and 'lionesque' figures are addressing him to the (beginning) of the Romanesque style. 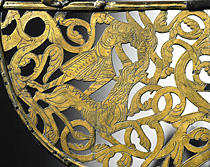 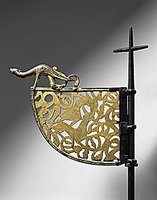 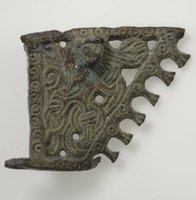 Even remarkably tiny 'weather vanes' are known. See the image at the right above..

This so called 'miniature weather vanes' were in use to determine a star's height above the horizon.

The type of weather vanes as the one above, from Tingelsted contains marks wich were probably used for measurement of the height of the sun.

Apart from this practical and ingenious use in navigation , weather vanes probably were first and for all of social status. The bronze of which the weathervanes were made was so precious as to make the instruments extremely valuable to the Vikings. But their true importance lay in their usage. The Viking ship which could afford to carry one and an individual who could use it, was able independently to sail the open seas. This made it possible to approach the British Isles and the continent of Europé, and withdraw to the open sea when the situation so required.

Probably the ship carrying the instrument was leading a fleet, and because of ils special status as a flag ship, the instrument functioned as a pennant when not used for navigation

Blindheim (1982) perceived a change in the construction of the weathervanes after the 11th century.

The change could indicate the end of their primary use. Turning them in into an object o social status of .... Christian churches..

Gilded bronze weathervanes appear on the roofs of medieval churches in Sweden, Norway and Finland where they are often regarded as ornamental: symbols of access to resources and craftsmanship for the important families who endowed such buildings. So maybe that is how shiny things at the end turn up on church-spires, independantly of what they represent..

They may have inspired the medieval Norman custom of attaching a gilded weathervane or cock to church roofs, which eventually spread to secular buildings such as castles in France and Italy where their use was restricted to certain ranks of nobility (Lindgrén, 1983).

See for references: - as always, I have attached a link to the publications/bookstore where the book can be bought ! 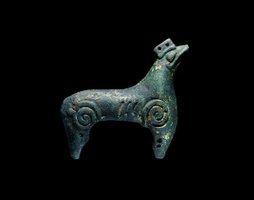 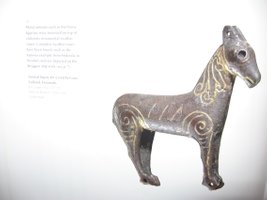 The two photos above: on the left an animal shaped figure wich would have been on top of a weather vane (finial). On the right: an animal figure from a weather vane, Lolland, Denmark. Both in the Ringerike style, to be recognized at the spiral on the hip and shoulder of the animal.