This blog I like to show you an interesting horse harness pendant from England from the Viking Age.

But first a short prequel. On a regular basis I am writing about my artefacts in the magazine of the so called 'Viking Genootschap' in Belgium, the Ravenbanier. I was writing the article for the magazine for January 2017 about another horse harness pendant I have - see here - as I started to Google on 'Viking horse harness pendant'. Googling on 'Viking' and adding words to that, have costed me a lot of money the last ten years but gave me the joy of the world also..

Googling so, I stumbled on this horse harness pendant on an auction website Ebid, where I was surprised to be able to buy this one for a fixed prize. Of course I was tempted and seduced once more..

(the candle in the photograph: I kept it this way, as everyone can use some extra light in these dark weeks to come..).

Interestingly if we turn the pendant 180 degrees upsidedown, we can distinguish also a 'fleur the lis' - clumsy executed as it might be - symbol. Now, being addressed to the 10th-11th century I like to argue even for a transverse/hybrid Anglo-Scandinavian / (Anglo-) Norman art style as by the use of this symbol. Also if one is considering one of the 'fleur the lis' variants as can be seen underneath this blog, one could easily see the horseheads as the form of the outward curlings of the fleur the lis, adding to the crude symbol on top (if turned 180 degrees) of the horse harness pendant. But - again - any remarks or alterations are welcome. 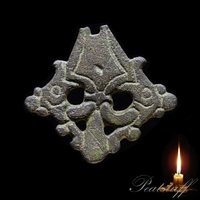 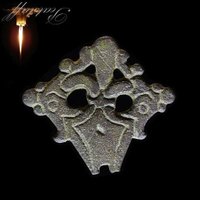 On a regular basis we can find the 'fleur the lis' symbol on horse harness pendants from the later Midde Ages. This is one of the symbols of France. A lot of English nobelty were originating from France and Normandy and encountered England via William the Conqueror. William the Conqueror encountering England in 1066 A.D., it is very well possible (also) that this horse harness pendant was made in the very late 11th century and stylistically being influenced by these Normans. But that is just a suggestion from me, wich - as always - is open for any discussion or debate.

This horse harness pendant was found in the late eighties of the 20th century by Peter Haworth approximately 1km South East of a small village called Fridaythorpe.

The area didn't produce a great deal, a few Roman items and a few later Medieval finds. But no other Saxon or Viking finds.

It wasn't recorded  it with PAS as the scheme wasn't introduced until the mid 90's. Of course I will try to do yet - as I consider it as an important piece of art and such a detailled provenance is present.

--> if you like to see this artefact live.. there will be an opportunity! Among many other objects, this horse harness pendant will go on display from March onwards (an exact date to be confirmed) as I am preparing (with the curator of museum Dorestad in Wijk bij Duurstede, Holland) an exhibition on Early Medieval art styles, decoration and design. This exhibition will include artefacts from the Franks, the Carolingians, the Frisians, The Balts, Finno-Ugrians, (nowadays) Rus, and.. of course.. the Viking Age (Scandinavian ietms and Anglo-Scandinavian and Hiberno-Norse items as well).

Keep a close eye on the News page in the forthcoming months!

An example of a later Middle Ages horse harness pendant with 'fleur the lis'  motif you can find here:

When consulted FLO officers, Vanessa Oakden pointed out to me that the style of the pendant made her think about the style used in a dress hook from the late 10th, early 11 th century, wich can be seen here:

but in my opinion the dress hook is of a far more refined and detailled design and excution and can be dated somewhat earlier than the horse harness pendant here discussed.

A similar horse harness pendant was on auction at Timeline Auctions, february 2015 - see image attached of the catalogue.

Dear Tony Brady.. this one's is specifically for you - giving me a mild kick under the butt writing a blog again after some absence! It truly is people like you who give me the joy in writing and interacting on these artefacts. 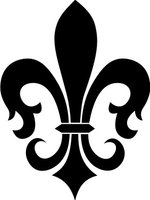 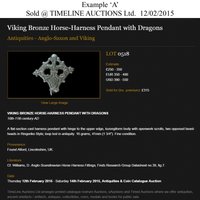