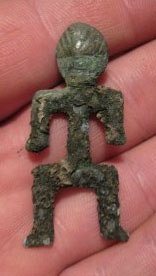 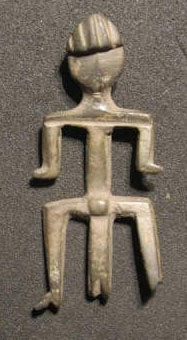 Human representations in artefacts are extremely rare in Finnic culture. Most of the time only animals like birds, bears, wolves and horses were depicted. They are only to be seen  among Finnic (Finno-Ugrian) tribes living further east in Europe, rarely in the Baltic region. The Finnic tribes had a religion based on nature, probably the shown images are charms or depictions of shamans.  The exact finding spot is unknown. Figures like these can come out of the Baltic region, but probably first east from Novgorod..