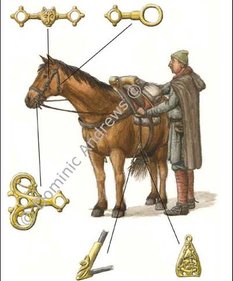 These horse harness strap fittings are an 11th century feature within England, and can be addressed 'Viking-Age' although stylistically they are addressed in the hybrid Anglo-Scandinavian style. A thorough, recent, publication to these specific type of equestrian equipment seems to be lacking but there is the publication of the - regrettably - late David Williams Anglo-Scandinavian horse harness fittings (2007)  of the Finds Research Group, volume II: Datasheets 25-40.

The book 'The medieval horse and its equipment' - Medieval finds from excavations in London c. 1150 - c. 1450 AD by John Clark regrettably isn't addressing this type of harness artefact.

The first horse harness fitting is showing a somewhat gruesome face. Copper alloy, 31.13 grams; 71.23 mm. Circa 10th century AD. An excellent rare example of the usually plain strap junctions of this period, this one having the two sections divided by a gruesome horned head of what is most likely to be the Viking god Loki. Each of the end terminals that would have received the straps is detailed with three raised circular turrets. These terminals are shaped like buckles of the period, possibly doubling as a pendant hanger from between the jaws. Ref: for similar strap junctions see, Benet’s Artefacts of England & the United Kingdom; page 329. Very fine condition.

Regrettably, the find spot is unknown..

In most Norse myths, Loki is portrayed as a prankster and a trickster. His misadventures often involve creating great problems for the Norse gods and for the inhabitants of the other worlds. When things seemed at their very worse, Loki often provided the remedy to save the day. His loyalty was often torn between the giants and the gods of Asgard and in trying to please both, he often found himself in deep trouble. Because of his wit and his cunning and mischievous character, Loki earned the name "God of Mischief". He was also considered the "God of Fire". Loki really couldn't help but be crafty. He had magical powers no other giant or anyone outside of the Asgard had. He could travel freely between the various Norse worlds and often accompanied Odin and Thor on their journeys and adventures throughout the universe. The gods often sought his advice, yet when they followed his plan, he sometimes tricked them into dangerous situations.

Although the addressing to the god Loki is very (Timeline) speculative, I added the describtion accompanying the object by the sale.

The second horse harness fitting is showing us a seemingly hybrid man/bear like face. 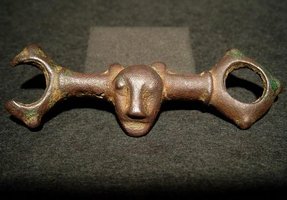 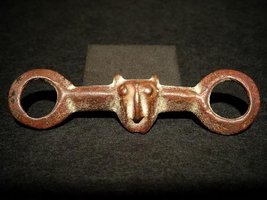 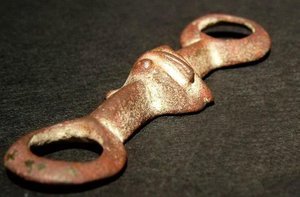 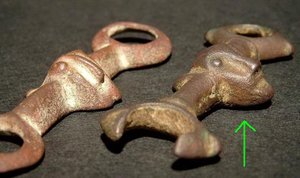 The fourth harness fitting is showing us a bat (or cat) like imagery. 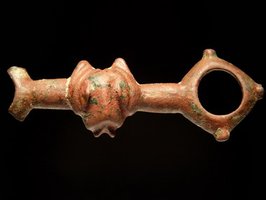 The fifth harness fitting is an intriguing one. The 'mask' face is recalling images on stones from Denmark as the Sjellebro stone and the Aarhus mask stone, although in a very deformed way.. I have never seen this specific type of horse harness strap joiner before and it would have a very special meaning regrettably only known by the smith and its owner.. 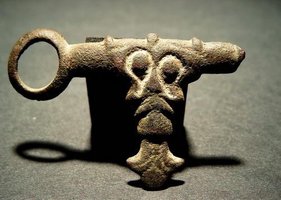 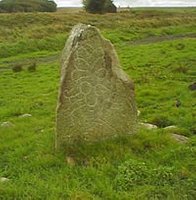 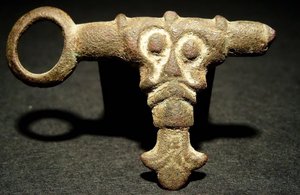 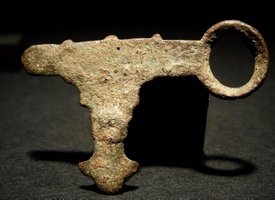 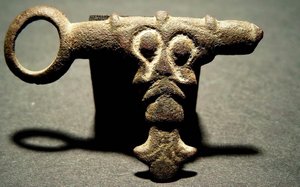 The last horse harness fitting luckily has a far better provenance, having been found in more recent times obviously, and is recorded to the pas under 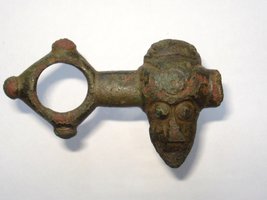 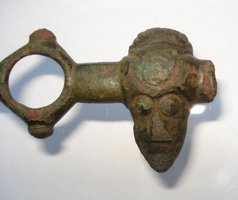 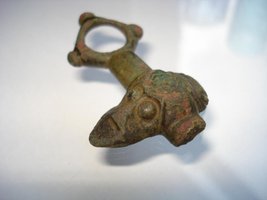 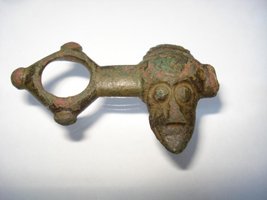