This week's blog I address one of the specific feautures in Viking Age Gotlandic jewellry. The animal head shaped brooch.

These specific kind of brooches are often described as 'boar' or 'bear' head brooches.

Consulting Lena Ideström, curator at the Gotlands Museum in Sweden about this issue, she responded:

'If you translate the swedish word for these brooches "djurhuvudformade spännen" you get "animalhead shaped brooches"! I am afraid that I don´t know why the english speaking world has choosen boar and not bear. The type is very typical for Gotland and we have never had big game like bears here, maybe it has something to do with that.

If swedish people ask me what animal it is supposed to be I usually answer wild boar or bear, I would think both of them possible. And the fact that they look like animalheads to us does not necessarily mean that that was the meaning when they were made'.

Consulting Gunnar Andersson, senior curator at the The Swedish History Museum, he responded:

'I have never heard that they are called boar- or bear head brooches. In Scandinavian literature these Gotlandic brooches are simply called animal head-shaped brooches'.

These kind of brooches may be addressed as 'boar' perhaps because of the significance of the boar in Norse religion as an associate to the god Frey. A man called Friedrich Kruze had once compared them even with a horse head..

The island of Gotland specialized in the creation of richly ornamented box-shaped and animal-head brooches. The jewellery found in Viking-period graves shows that the Gotlanders shared in a Norse material culture, but had their own very distinctive regional identity.

The form of animal head shaped brooch with a separately-cast backplate is introduced around 900 AD. Many examples have been pierced to accept an attachment chain from which utensils could be hung in an ostentatious manner. 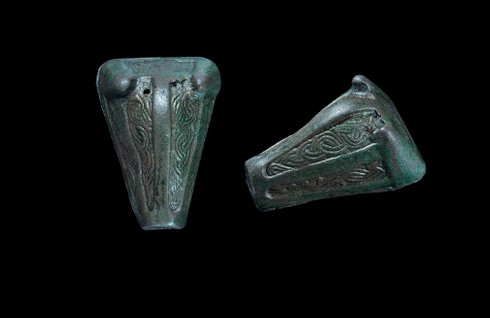 A bronze boar-head brooch with separate backplate; the body formed as a hollow-cast case with upstanding ears and raised bar to the muzzle separating two panels of three-strand interlace ornament; to the sides and top, panels of scrolled tendrils; backplate attached by five studs, with rectangular slot, pin-lugs, round-section pin and integral catchplate; hole to the brow between the ears to attach a chain, small casting flaw to nasal. 66 grams, 55mm (2 1/4"). Very fine condition. 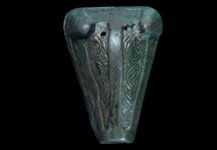 A very nice cd with images from Gotlandic Viking Age jewellry can be found and here:

Article from the British Museum:

Other: (the underlined titles are linking to a book store where these books can be ordered).

Brown, Katharine Reynolds, From Attila to Charlemagne, Arts of the Early Medieval Period in the Metropolitan Museum of Art, 2000 - p. 317, Gotlandic brooches.

Kovárová Lenka, The Swine in Old Nordic Religion and Worldview

A lot of more images of animal head shaped brooches can be found in publications, books and on the internet, so this is a very select catalogue.