This is a superb ancient Viking braided silver bracelet / Oath-ring, dating to the 9th - 10th century A.D. It is formed from rods of silver, twisted about each other in a ropework formation, the terminals welded, forming a double spiral decorative element. This type of double spiral can be found on other Viking silver bracelets from Gotland in Sweden see here. This example recovered during dredging work is intact, though parts of the original weld has failed due to the conditions of sediment and machinery, this has been repaired but sadly it is no longer suitable to be worn. This bracelet is a very rare museum grade example, classic Viking workmanship and presence. Such an item would have been a prize piece of jewellery, worn as an 'Oath-Ring', given by a Jarl to brave and worthy subject. The silver likely taken at some stage as booty in raids, used as form of currency in a barter system of exchange. The weight of this bracelet alone would have been the monetary equivalent of at least 42 silver pennies, when 1 penny would have bought you 15 chickens! A wonderful piece of iconic Viking jewellery for the serious collector.

So far for the salesman advertisement ! So.. it got in hands of the serious collector ..

A bracelet / arm ring of this braided type I think was a one off chance to aquire for my collection. 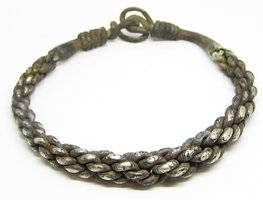 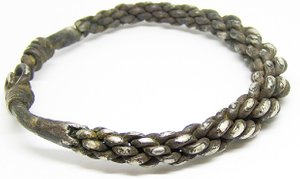 Altough somewhat 'weathered' by the conditions of sedementary and machinary, a highly collectable piece of distinct Viking Age silver art.

This bracelet was discovered during dredging on a construction site near the Jarise järv lake in Estonia.

Estonia was at that time "a house beside the road" or a staging post. The trade-routes between Northern Europe, through Russia East to Persia, passed through here. see Vikings in Estonia and Estonian Vikings

The island of Jarise järv lake as can be seen on the map below is coloured dark red. The dark red areas indicate original Viking settlements.

Estland (Eistland or Esthland) is the historical Germanic language name that refers to the country at the eastern shores of the Baltic Sea, and is the origin of the modern national name for Estonia. The largest island of Estonia is called Ösel in Swedish and its inhabitants used to be called Oeselians

The Oeselians were known in the Old Norse Icelandic Sagas and in Heimskringla as Víkingr frá Esthland (English: vikings from Estonia). 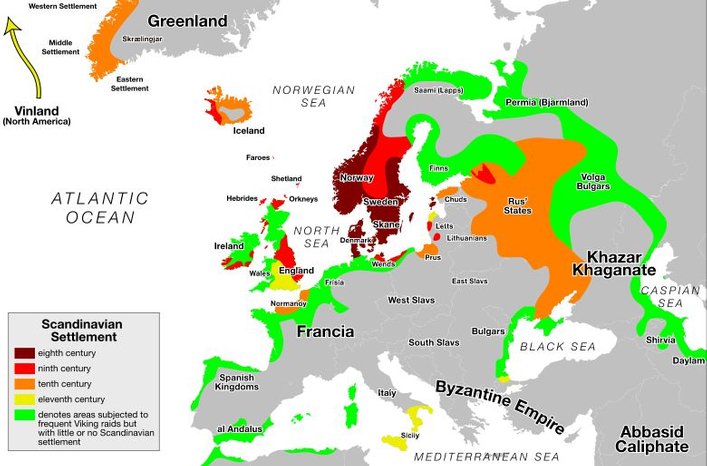 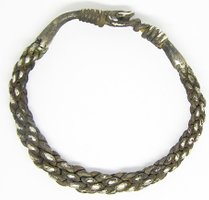 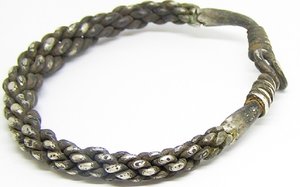 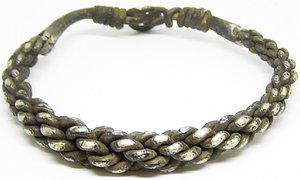 The history of the vikings of Estonia is a remarkable one if one is till to consider (I am not) to pinpoint 'The Viking Age' between 793 A.D. and 1066 A.D. - as that addresses a British actuality, certainly not the actuality all over the Viking world.

Around 850 A.D. Estonia was on the southeastern trading route of the Vikings to the Black Sea and Turkey onwards. In the following centuries Slavic tribes from Russia failed to submit the citizenry and missionaires from Denmark, Sweden and Germany failed either attempting to christianize the people. In 1093 A.D. the pope even sent crusaders to the area. Around 1187 A.D. (!) vikings from Estonia plundered Swedish towns, but finally in 1227 A.D. German knights succeeded, after more than 25 years of resistance of the Estsled by Lembitu, to get control on large parts of the coastal areas. 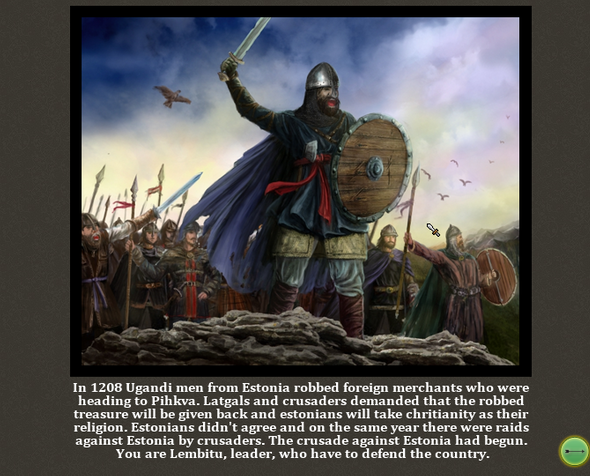