In this blog we move on to another type of mysterious stone sculptures, where is much debate about from wich period of time they are dating. Their symbolism is even more mysterious - but I have a daring theory about them, inspired on the weapon (flag) of the Dutch provence of Zeeland.

The weapon depict a struggling lion who overcomes the water, as a symbolism of Holland's ever struggling against the water. 'I struggle and I will rise above the water' is my somewhat 'stonecoalish' translation of the line 'luctor et emergo'. But what on earth would I relate this to the four mysterious stone figurines on a graveyard in Dacre, Cumbria, England ?

I address that a bit later on.. 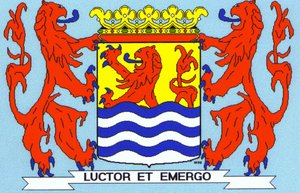 Of unknown origin the so called 'Dacre Bears' have been puzzling for centuries. There is speculation that the bears are in fact lions, dating possibly from Roman times. Other theories have suggested they date from the mediaeval era. In my opnion the discussion if it are bears or not I will engage, but lions.. ?

In 1890 Chancellor Ferguson thought that he had an answer and said - or better: had a theory - that the bears told a humorous story in four stages.

The first, the bear (now sadly missing its head) is seen holding a post with its front and rear paws. We see the bear missing its head, or was it deliberately casted without head ? Why I am suggesting that, I will address later on.

In the second, the bear has a small animal on its back - not very clear on the photo though,  perhaps a cat or a lynx, and is turning its head to see what is there.

Ok. A.D. 2015, would we still consider it to be a cat or lynx attacking the lion, it would have been a courageous one, as they are considered by some to be lions. I leave that thoughts upon you.. 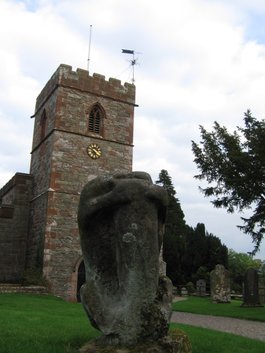 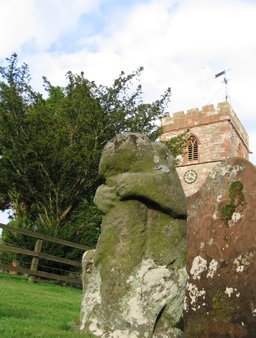 In the third, (left photo beneath) the bear has flexed its shoulder and is anxious to remove the animal. This is the most crudely worked of the pieces, perhaps because of its complexity.

Finally, the bear has a smug, satisfied look on the face, as if he has eaten the creature. (photo's on the right beneath and thereunder).

This carving is the best preserved and with a clear mane and tail, suggesting the bear is indeed a lion. (as stated in the folder, available in St. Andrews's church itself). Again.. if it is a lion, wich animal would have the nerve to crawl upon its back ?... 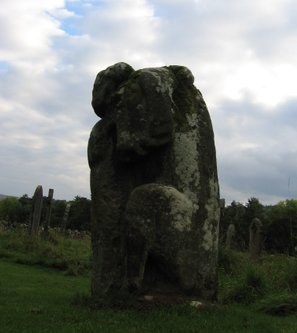 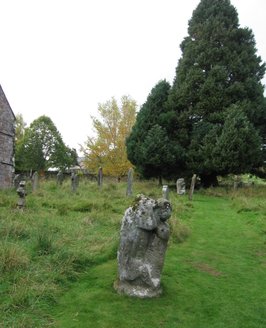 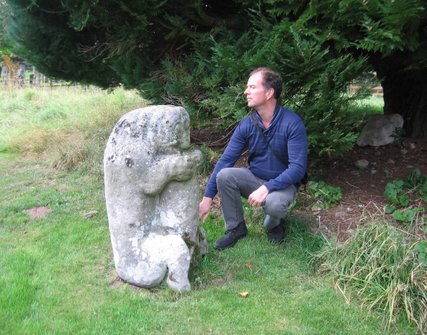 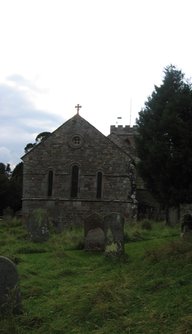 When I was examing the 'last' statue, I was mentioning a half holemark on the head. Also I had the strange feeling that what I was watching as well could be very old, or almost could be extraterristial, as strange as it may sound..

The bears were first recoreded in 1704, but are clearly much older. No one knows their original locations - suggestions include on the church tower, or on the battlements or a gateway of Dacre Castle. Each of the four creatures has a depression on top - too swallow for a flaghole, but just the right size for a candle or a wick floating in oil.

My theory then, - at last for the symbolism - is Good overcoming the force of Evil. If Good is starting losing its head, it is getting unaware of the Evil and is attacked by it. Waking up just in time, one refinds his head (sense) and fights its way back.. luctor et emergo.

Any suggestions can be mailed to me, vikingsandartefacts@yahoo.com or can be addressed to the church itself at: admin@dacrechurch.com 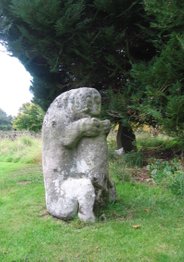 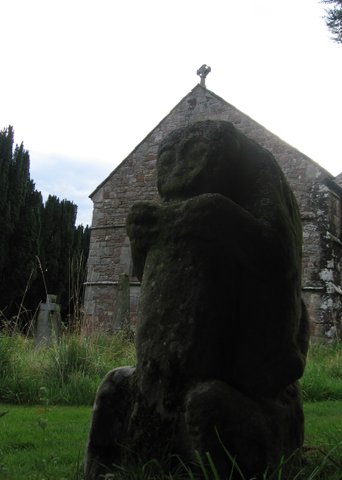 In the forthcoming blog I take you to two another interesting stone sculptures, inside the church of Dacre..

Holder, G. The guide to the mysterious Lake District, The History Press, 2009