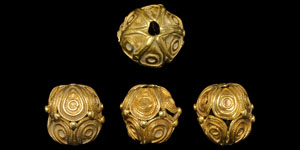 At very close look at the beads can be view/magnified by this link: 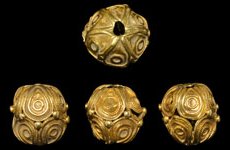 A group of four sheet gold beads, each formed as a hollow bulb with granulation, filigree ovolo detail and applied rings.

I had a feel that these beads were of Scandinavian/Swedish origin. When consulting the curator at the National Historic Museum of Sweden, he confirmed this.

Even more he was stating:

"Yes we do have similar – if not even identical – gold beads from Gotland in our collections. They have inventory number SHM 13441:1-3 and are from Petes, Linde parish on Gotland.  Beautiful little things and kind rare I would say".

As mentioned under the beads section, beads were very valuable. Golden beads are the far most rare of them, and would have only been worn by women of (very) high status. 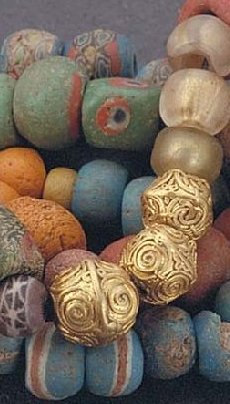 Visiting a travelling exposition of the National Historic Museum of Sweden in Assen (provence Drenthe in Holland) in Spring 2012, I noticed similarlike golden beads in a bead necklace on display.

Link to exhibition with similarlike golden beads on display

Look here for a picture of an even more  elaborate type of golden bead from Gotland.

Intruiging to discover that the vikings weren't the first to make such beautiful beads, as can bee seen on this picture.

Viking artefacts from the isle of Gotland have a distict architecture of itself, as also can bee seen on the boar heads brooches and so called 'box brooches'. Also the 'fish' necklace pendants are unique within the viking area. 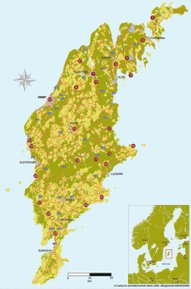 A nice overview of what is to bee seen of the viking age on Gotland see:

Link to the highlights of viking heritage on Gotland

also on this site a CD-R  can be ordered with al kinds of pictures of beads excavated on the isle of Gotland..