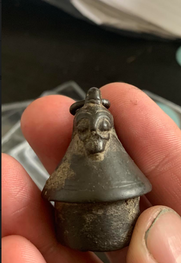 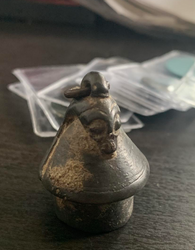 Once in a lifetime one encounters a unique object from the Viking Age. Apparantly having had functionated as some kind of stopper, to my knowledge, there isn't a second example known, regarding this type of object. Stylistically wise the decoration can be addressed as of Hiberno-Norse origin, the Norse-Gaelic. In Ireland, Scotland - including the Hebrids and the Isle of Man - from the 9th to the 12th centuries onwards a hybrid culture of people were living with a Gaelic background besides Norse immigrants - viking, or otherwise. These immigrants settled in these areas and adopted (partly) the culture of the Geal and intermingled via marriage. In - what we now call in hindsight - the Viking Age, these people distinguished themselves in their art outings on artefacts and in behaviour. They were very determined.

'Men from the east'

These 'men from the east, what is to say: immigrants from Scandinavia, still were distinguished from the 12th into the 14th centuries as such. Centuries after 'the end of the Viking era'. Eventually they assimilated in the population, but nowadays do not call someone speaking Gaelic an Englishman or woman. That is still not done, the Gael are proud still about their heritage, as the old parliament shows us, at Tynwald, on the Isle of Man. Every year, the new laws are nominated in publiq in front of the aucience. 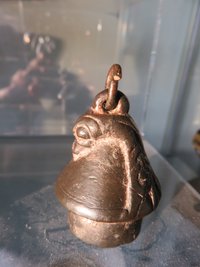 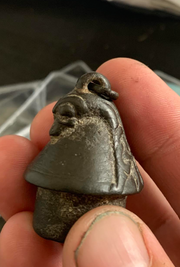 The object measures 3,5 centimetres from bottom to top and weighs 55.68 grams wich makes it a heavy piece. It has all the appaerance of it having functionated as a - very luxury - stopper on a container with liquid. A far-reaching archaeological research might unravel the kind of liquid what might have been in the container. Another specialist in Viking Age artefacts from the United States thought the liquid might have been mead, because of the small container the stopper had been used for. Mead was consumated in small quantities, in contrary to the more usual ale. Alternatevily the container could have contained something different, like (precious) herbs or the like.

The hiberno-norse style can be distinguished in the way the face on the front of the stopper had been depicted. In the way the face is depicted and had been casted in addition we recognise the Borre style. The round 'bulging' eyes and prominent eye brows are characteristic features of this distinct style, wich places the artefact in the late 9th or 10th centuries. Above all - the artefact is 'über-viking' by the way the smith had used the 'hidden-face'technique. 'En face' we see a humanlike face with eye brows, but when one turns the artefact 45 degrees, one suddenly sees a zoomorphic/animal head, wich could depict a dragon or a snake. Depicted in a 'friendly'way. To say is, whát is depicted, not what the intention of the smith was, depicting it and the way it was intended to. The smith must have had a very high level of spatial insight and composition and 'breathes' an alltogether refinement wich I categorize among the highest level of Viking art I came across. 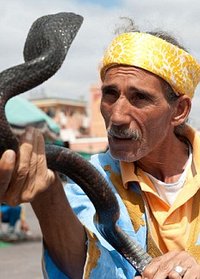 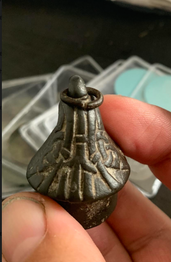 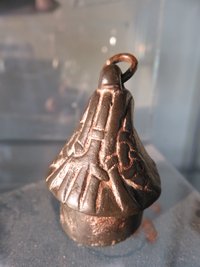 On the back of the stopper we see decoration in Borre style, in the form of the typical 'Borre knot' and interlace decoration. If we consider the Borre style decoration as the neck of a snake, one can argue that this is depicting the widening neck of a cobra, to be recognized from images of a snake sedator. But that, of course, is just an intepretation from on my behalf, although a taste for the exotic is a feature among the vikings, considering the Buddha figure on a bucket once found in the Oseberg ship. On top of the stopper is a small ring wich could have been used to hang the container or to carry it, although this seemingly is very vulnerable and delicate in its use. However, the owner of this artefact must have been of high class, someone who could afford such luxury and must have made quite an impression. 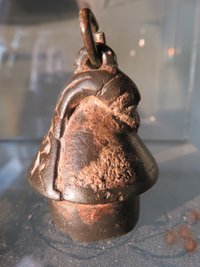 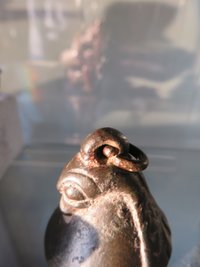 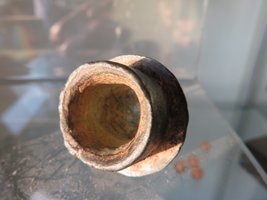 To conclude, beneath is depicted, with some artistic freedom, how the stopper could have been attached upon a container. Possibly during the Viking Age, something already excisted as 'a bottle of Jägermeister for underway'. We will never be sure, but impossible this assumption isn't either. 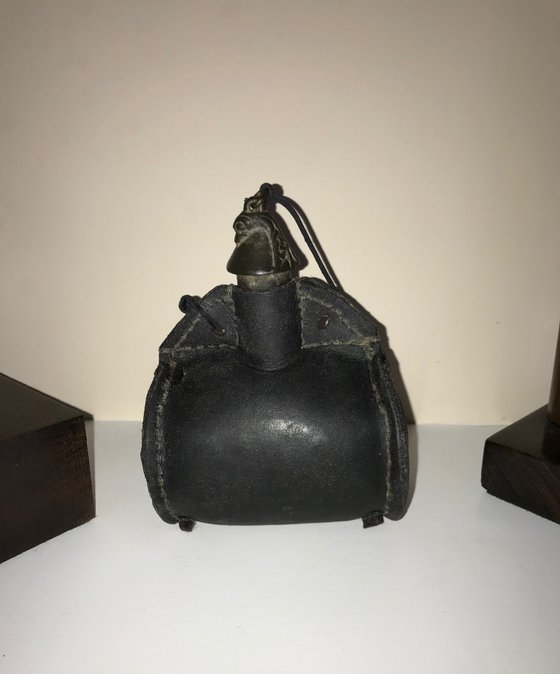